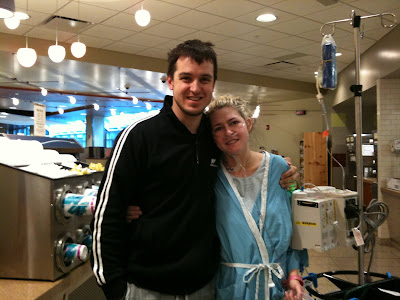 I just got home and was with Julie for about 48 hours straight. I actually slept very well at the hospital. Julie had the room cool which is unlike her. Spending so much time with your spouse is really nice. However, I could tell that our true colors were starting to come out yesterday as we started to banter about how to do certain things etc. I had an Art Hendrickson idea that involved art for our wall with some of her equipment. She like any woman was not excited about having something very out of the ordinary on a wall at home. At one point Julie said, I think its time for you to go. I hope you smiled as you read that. We (or I) set it aside and just enjoyed the rest of the night. She won. (I hate that).

I woke up this morning to the Cardio Thoracic Surgeon and his team talking to Julie. They said that her chest tubes are now sort of taking over the job of draining fluid for the body and they are seeing a little less output from the kidneys. They took out a small tube that was sort of in the center of the plural cavity draining near the sternum this morning and hope to take out one or both others tomorrow. I like Dr. Selzman. He is funny about Julie's questions and lightens the mood when it comes to her surgery. The other day she was complaining about the discomfort the chest tubes were giving her and he said, "Would you stop complaining? It's not like you had a major surgery."

This morning Julie and I went to breakfast in the cafeteria. The food there is pretty good and in some cases great. We had a nice hour sitting together. We later went upstairs to get a new meropenem bag for her 24 hour infusion. We were happy to see her bedding had been changed. On our way out there was a code in the room two or three doors down and there were about 30 different clinicians running from different parts of the hospital. Her nurse took the time to stop and tell Julie that she hadn't paged her doctor about a question she had because they were having an emergency. Sounds comforting right? I thought it was nice. Julie said if she were dying she wouldn't want her for a nurse because she took some time to tell us something that obviously didn't take precedence over a code. It was well intended anyway.

I asked Julie if we should loop around the unit (I wanted to know HIPPA information about what was going on with the patient that they obviously needed 30 people to attend to). No joke, there were probably 30 people running to that room over the next 3-4 minutes. Julie said, "Absolutely not! You're one of those people that slows down to look at the gruesome accident while emergency teams are trying to get there! If I'm in trouble get out of the way so they can help me!" You know half of you do it out there. Julie has a better, more humanitarian perspective. Living in hospitals all your life and at times fearing for your life I'm sure changes your perspective. Somehow I think she'd think that way anyway because I can just hear Linda her mother saying the same thing to Rick. Anyone in the health field reading this is happy to hear what she said to me and doesn't like guys like me who want to pry. Hey, none of us are perfect.

The worst news of the day is she has been taking Miralax for a few days and Milk of Magnesia to pass a stool. Today they are changing it to Go-Lightly. Anyone who has had a colonoscopy may know this as the gallon challenge. Its a gallon of laxative to be drank over 6 hours. Yesterday she said, "Why don't we go straight to the good stuff and get this over with?" This will help her to breathe better because the bloating is putting pressure on her diaphragm in addition to the chest tubes.

It's been a week since we had the call. We were here hanging out last Saturday afternoon like any other day. Some reflection later in the next post.
Posted by Dave at 2:00 PM