Submit to What You Can't Control

Julie has been dealing with a lot of nuisances this week. With her blood sugars everywhere, nausea, vomiting, bloating, sinus pressure from her CF and a sore incision, this week has been a bit rocky. The other night she was weeping because of the pain it was causing. She doesn't cry very often so I knew she was in excruciating pain. She couldn't even keep her pain pill down so she had to just tough it out. Finally after a few minutes of watching her suffer without any power to do anything, I asked her if she would like a Priesthood blessing. She accepted. I don't remember particularly what was said, but once I was done, we tried a few new approaches with a heating pad my mom gave me, and a Lortab. For the cynic out there, a priesthood blessing at the very least gives you clarity of mind. It is a time to meditate on what is going on for the giver and the receiver. From our perspective, it is what was needed for us to have the inspiration of what to do. She was so bloated she said 'I feel like I'm going to explode out my incision'.

It is difficult to watch anyone suffer, especially those you love. Many times we can do nothing but call on a higher power for help. This is very consoling, and can bring peace, even for the non-believer. When we submit to what we can't control, it seems as though things play themselves out and improve. I can compare the feeling I had the other night to how I feel when my child is sick and inconsolable. You feel helpless, frustrated, tired; and then you think about how they are feeling, and what you are feeling doesn't even matter. I couldn't do anything the other night but watch and assist. It was tough, but then again, not that bad for me. She had a hell of a night; she is the one who was cut in half just over 6 weeks ago. She is the one who had her diaphragm pushing up on her incision without any pain med or even Tylenol in her body. She is the one who couldn't vomit or go to the bathroom to relieve the pressure. Gas ex, miralax, milk of magnesia and other remedies didn't even touch it. But after a blessing with the power of the priesthood and more importantly her faith it would help, Julies mind became clear, and she knew exactly what to do. I don't know what we would do without this power of prayer, priesthood and her faith. It has made very intense situations, not only bearable, but low stress. When there is a problem, we have been able to assess what is going on and act. It is a real power that cannot be denied. 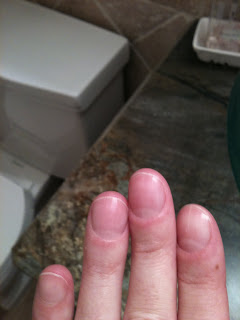 This picture was taken at 4:48am last Saturday morning after feeling bloated through the night. This wasn't the night I just described. However despite feeling crummy, and not sleeping she took this picture of her nails and sent them to her Mom. "Look at how pink my nails are."

We have had a lot of positives in the past week. Julie is a bit of a star up at the hospital. Her nurse told her she heard how she was showing off in rehab by running. Julie said 'I'm not showing off, I just want to get better.' Her determination to be compliant is truly what is causing her to thrive. At times I hear the nurses talking to Julie saying things like 'we are so proud of you' or 'you are doing fantastic'. Her doctors on more than one occasion have told her that her recovery is remarkable. Despite her nausea this week, her nurse said, 'How many weeks out are you?' "Six" Julie replied. 'Unbelievable.'

Our nanny took Thursday off so Julie had her first few days alone. I arranged for my mom to come over when the boys woke up. She told me she would call her. To my surprise on my way home yesterday she called and was there alone with the boys in the background; My mom wasn't there. 'Was I supposed to call her?' "Yes! I don't want you lifting those kids." When I got home I asked her how it was taking the kids by herself. "Awesome" she said. "I didn't have to have anyone here." I was a little taken back by her response. She felt empowered; to do mom things by herself. Our nanny called in sick today and she had the same attitude, however this time I made sure she didn't take the kids out of bed by herself. Her friend Heidi came over to help her.

Life is moving forward. We have struggles, but who doesn't? This has been a good week despite what Julie has gone through. She still has to be careful what she eats so as to not upset her stomach, but she just told me it feels like shes got a handle on it. Little by little life is not only back to normal, but better than it was.
Posted by Dave at 8:50 PM