Julie's Running with the family 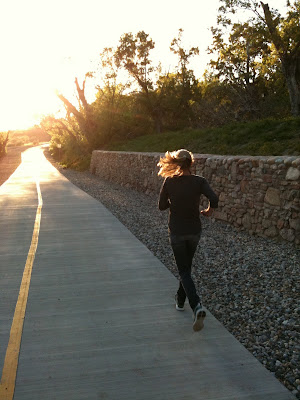 Julie and I decided to go up to the new trail above Tanner park on 2700 E. on Friday night. We started out just walking up the new paved trail. Every few minutes I would ask her if she wanted to go down below to the river, or if she was doing alright. She would just reply simply, 'No lets keep going.' Before we knew it, we were at the bridges that go over I-215 and I-80. By that time, she had a bit of a side ache. I told her, "If we go over these two bridges and up that hill over there we will have walked all the way to Wasatch Blvd." 'Let's go.' So up we went to the top.

This was the first walk of its kind for Julie and I and the boys. Any other walk would have accommodated and oxygen tank on wheels, and would have been much shorter. To my surprise, after taking a few pictures of her and the twins, she asked, 'Should we run back?' I had to act non-chalant and act like I wasn't just blown away. It was incredible to me that I watched my wife truck it up about 2 miles of uphill trail. To hear her suggest we jog back was invigorating. I found myself holding back emotion as I thought of how proud her father would be as soon as I sent him the shaky video of her running as I run beside her. This picture above shows how she just kept motoring along.

Julie had been postponed at rehab that day and she left irritated that they moved her time without telling her. She was really looking forward to hitting the milestone 15 minute run in. I think she had it in her mind she was going to run when we started the walk. When we got close to the end, she realized she had set her glasses on the jogger at the top. We had to get back and drive to Wasatch before it was dark. Luckily they were right there next to the curb at the top where we took a picture of her. On the way home she asked me if I was going to run in the morning. She wanted to join me and we called her Dad to come along. She told me she wants to do something amazing 2 months post op. I told her, "You just did!"

Saturday morning we hit the pavement and headed to Sugarhouse park. What was really cool was to see her exceed the limits she had mentally put on herself by running on the treadmill. I had a Garmin GPS with me and I told her her pace was much faster than she was used to. To her surprise she was feeling okay. That being said she immediately toned it down to pace herself. As I ran along side her, within a minute or so she was back to the pace she was at before. So much of exercise and what we do is limited by what we think we can do. I was simply amazed at what I was watching. She has amazing drive!
Look at the smile on her 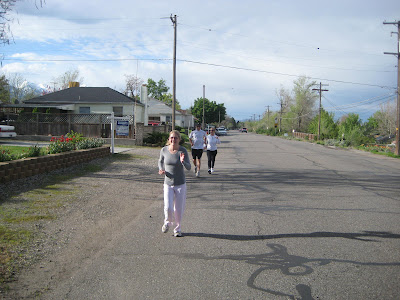 face! She initially told me in the hospital that she didn't want people in rehab asking her when her first race was going to be because she didn't want the pressure. At that time, I don't think she had any idea the amount of energy and ability she would shortly have. I am so proud of her and her hard work. Nice job Jules!

It is very motivating to see someone take full advantage of what is so selflessly given to them. It is at times like these that I can't help but think of the selfless donation one decided to give when they had no intent of dying soon. This donation of life is truly that, a new life for my wife and family that we otherwise would not have without organ donors. THANK YOU!!
Posted by Dave at 8:44 AM